I am thrilled to share exciting news! As of June 1, 2022, I will be taking the role of Executive Director of Snow Lion Preschool (formerly Snow Lion School). It’s a longtime dream to be at the helm of a school dedicated to early childhood education. When Kristin approached me with the idea, promising to guide me in the distinctive role that she has cultivated for almost three decades, it was a dream come true!

I discovered my love for early childhood education after starting a career in New York City art galleries and museums. As a springboard diving coach for 20 years, I found coaching children more inspirational and joyful than my art career. I enrolled in graduate school at Bank Street College of Education, and I gained practical teaching experience immediately. I reached out for suggestions to the mother of a former diving student who is also the Director of the Barnard College Center for Toddler Development. As luck would have it, she said, “Come work for me at the Toddler Center!” Observing and working with toddlers, I understood and saw developmental concepts evolve from one stage to the next: parallel play turned into cooperative play; separation from a primary caregiver became independence; collecting and carrying toys gave way to using toys in elaborate and imaginative ways. I fell in love with everything related to early childhood development. I worked at the Toddler Center for six years, during which time I was a Lead Teacher, Supervisor to undergraduate student teachers and an Administrator. At the same time, I earned an M.S.Ed in Museum Education with a certification in Early Childhood Education.

While pursuing my new career in Early Childhood Education, I became a mom to twin boys and moved from NYC to Niwot. A significant motivation for the move was the developmental and educational opportunities my husband and I wanted for our children—space and time to play in nature, a supportive community and fresh air. As my children got older and I began working at Snow Lion, I quickly discovered that it’s far easier to work with other people’s children! To be sure, I am an infinitely better teacher and parent thanks to questions and insights from you, your children, my colleagues and Kristin.

The contemplative component of the Snow Lion legacy—connection, being present, slowing down—informs much of my understanding and growth. As a high school student, my favorite teacher taught a class called Eastern Thought. In retrospect, it was a rogue contemplative education class at a rather traditional prep school. The teacher became my guru and inspired me to take many religion courses in college. (One professor, however, insisted that Buddhism courses should be philosophy courses.) Fast forward many years, and it makes sense that the prayer flags in the play yard struck my eye the first time I drove by Snow Lion. And now I can’t think of a more fortuitous opportunity than what is in front of me.

I am excited to embark on my next phase of teaching and learning with an inimitable mentor, supportive and dedicated colleagues, enlivening children, and the exceptional Snow Lion community. It is a dream come true.

With much enthusiasm,
Rachel 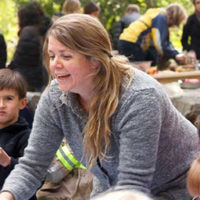